Not all boilers are equally efficient. Aside from affecting performance, the energy efficiency of your boiler has a major impact on how much you’re paying for your energy bills from month to month. Considering that the average UK household can trace a significant part of their gas and electricity bills to heating, choosing an efficient boiler can save you around £100 to £300 every year. Conveniently, boilers in the UK are assigned an energy efficiency rating that you can check right away.

What is Energy Efficiency?

The energy efficiency of a boiler refers to how much of the total fuel it converts into usable energy. This is typically expressed in percentages. For example, a boiler that’s 92% efficient will be able to use 92% of the fuel in heating the home, while the remaining 8% of the fuel would become waste products. If you think about this from a financial perspective, this means for every £1 that you pay for your boiler’s energy bills, 8p would be wasted. The more efficient your boiler, the more heating it can generate for the same price.

If you’ve had boiler installation done on or after April 2018, your boiler has a minimum efficiency of 88%. In comparison, some older boilers that go as far back as the 1990s might be only 60% efficient, which is a huge difference.

There are three rating systems for energy efficiency in the UK: SEDBUK 2005, SEDBUK 2009, and ErP.

The dominant one today is the ErP (Energy Related Products Directive), which has been the default rating system for models created since 2015. Boilers are assigned letter ratings by the ErP, ranging from G (the least efficient) to A+++ (the most efficient):

Boilers can have separate ErP ratings for hot water and heating. Nearly all modern boilers are A- or B-graded. Boilers installed on or after October 2010 are required to have a minimum efficiency rating of 88%, but this was raised even higher to 92% in April 2018 with the Boiler Plus legislation.

The ErP is actually the newest of the three rating systems. Released by the European Union in 2015, the ErP covers all heating products across the UK and Europe. Its main goal is to encourage the use of efficient boilers, in line with the EU’s environmental advocacy of reducing greenhouse gas emissions and shifting consumer preference from fossil fuels like gas and oil to renewable energy.

All modern boilers in the UK have energy efficiency rating labels. Here’s what the ErP rating label looks like: 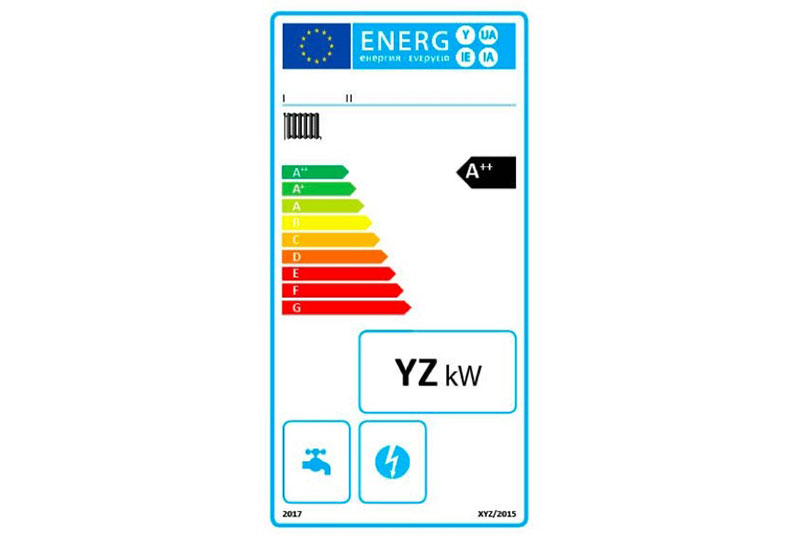 You can clearly see the different rating levels, with the boiler’s rating specified on the right. The label indicates the supplier’s name and model ID at the top as well, while the average heat output is shown below the rating scale. Depending on the label, you can also see other properties of the boiler, such as the sound power level or whether temperature control is included.

This is the SEDBUK rating system:

Since 2010, all modern boilers are at the top tier of the SEDBUK system. The SEDBUK rating is usually found in your boiler’s manual.

SEDBUK ratings have been mostly replaced by ErP ratings, but sometimes you’ll still see both ratings on one product. With the ErP, you can’t compare the energy efficiency of two modern boilers because they’ll be both A-rated. However, even if you know the exact efficiency percentages of the boilers from the SEDBUK system, the actual difference in performance might be negligible. Modern boilers might have only a 1% – 2% difference in their SEDBUK ratings. You’ll find more striking differences between modern and older boilers, especially if the latter is over 15 years old.

Energy efficiency is also calculated differently in both systems. While the results are similar, a boiler would have a lower ErP rating compared to its SEDBUK rating, so the two are not interchangeable.

However, for older boilers, it could be trickier. What you can do is find out the boiler’s model, model number, and manufacturer. You can then input these into the PCDB database, which has information about nearly every boiler in the UK. The model and model number are indicated on a small plate or sticker that’s usually found under the boiler or near the dials.

On the other hand, if you can’t find the model number, you’ll have to estimate the efficiency based on the type of boiler you have. For example, if there’s a condense pipe connected to a drain, then you have a condensing boiler, which is at least 85% efficient. When a Gas Safe engineer visits for boiler servicing, you can also ask them to check. With older boilers, just remember that they’ll be performing below their original energy efficiency rating because of age.

Energy Efficiency for Sustainability and Cost-Effectiveness

The energy efficiency rating is one of the first things you should know about your boiler. While most modern boilers will be A-rated, you might be surprised to find that older boilers have much lower efficiency ratings. Because your boiler’s energy efficiency influences how much you’re paying for your heating, it’s worthwhile to aim for a boiler with an ErP rating of B or higher, which is more cost-effective and environment-friendly over the long run.

About the Author: administrator